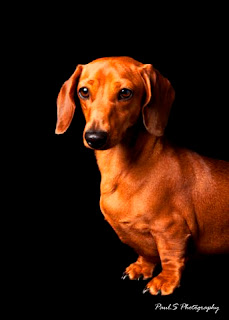 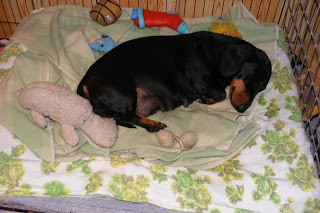 Liza and Lara had their litters 8 days apart in May 2010, from 2-3 weeks of age they shared mothering duties of all the puppies between them. These pictures show Lara on duty while Liza takes a break. 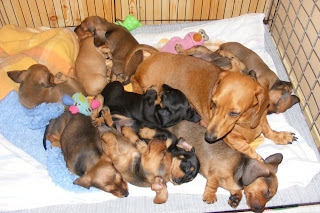 The last time I posted was in March after the Casino shows, where does all the time go?
April was a relatively quiet month showing, we did however travel to Macksville for the Nambucca Agricultural show where our Harry was awarded Best in the Hound Group and Junior exhibit in Show, Daisy and Angel won their classes in Group but did not go any further on the day.
The 4 Grafton shows were next, with Daisy Runner up to Best in Group at the Maclean Ag.show and the rest of the shows Daisy and Angel were awarded their age classes in group. Bonville was next on our schedule and what a joy that one was for us. Daisy went Runner up to Best in group and Intermediate in Show on the first day, then was awarded Best in Group,Runner up to Best in Show and Intermediate in show on the following 2 days. The Regions shows were next and what dreadful weather we had that weekend, cold, rain, wind and mud. My friend Meg who has Wire Haired Dachshunds and I, and no doubt the dogs as well, although they didn't complain as much as we did, had had enough after the first 2 days so we didn't stay for the Sunday show. Sunday the sun came out we were told, but there was still mud!
Kyogle Kennel Clubs Judges were also good to Daisy where she was awarded 2 Best in groups, 2 Intermediate in show and 1 Runner up to Best in Group over the weekend.
Lismore 3 shows judges were certainly not Daisy's fans and she was not awarded a challenge over the 3 days, Angel beat her first up, then our waggly tail Lucy won on the second day and the third bitch challenge went to a friend Robyn's bitch which was nice. Harry was awarded the dog challenge and Best of Breed at 2 of the shows and the junior class in group. Our Meg's 'Max' Wire haired dachie was awarded Australian Bred in Show at the Sunday show, good on you Max!
Now for some home news... We had 2 litters born in May, the first was our Liza who had 2 boys and 2 girls, 8 days later Lara had 6 babies, 5 boys and 1 girl the father of both litters our "Harry". They are all beautiful babies and the Mum's have done well raising them, the past couple of weeks they have shared all of their babies between them. What wonderful temperaments these puppies have and what a joy it has been for us having them here. Liza's puppies are all sold and going to wonderful homes shortly. Lara's boys we still have to sell, most purchses prefer females I can never understand why, as when the time comes and I am down to 1 pet again(heaven forbid!) it will be a male, I just adore my boys. Until next time, whenever that might be..........Kind regards to all, Virginia
Posted by Virginia and Lyle at 11:07 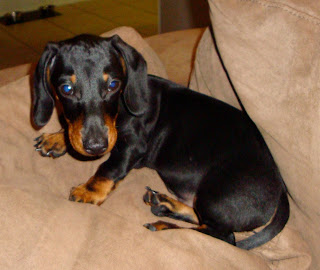 This is 'Pokie' from a recent litter who now lives in a loving home with his new owners Julian and Mili.

Dear Virginia and Lyle,
Just wanted to let you know that our little Pokie is the cutest little boy and is loved by everyone that lays eyes on him. He has been a blessing and we have loved every minute with him. What is most pleasing is his excellent behaviour and temperament.
and from day one he has been going to the toilet on his newspapers, with only a few accidents. He is also just starting to find his voice which is quite amusing.
Posted by Virginia and Lyle at 10:50 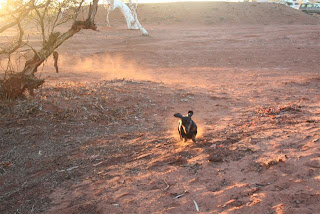 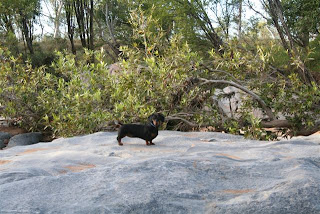 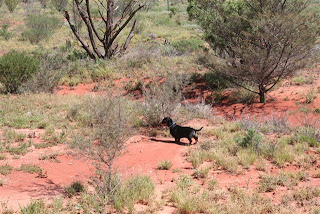 Millie and family have been travelling around Australia and they have sent me a few photos of Millie enjoying the scenery.
Just look at Millie run and the dust trail she is stirring up behind her, it sometimes surprises people just how fast Dachshunds can run!
Posted by Virginia and Lyle at 10:13