The adventures of Inga, the beginning 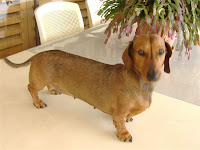 In 2007 a lovely couple  came here to look at some puppies we had at the time. They wanted another dog as their Standard Longhaired Dachshund was' getting on'. They had brought James down with them, to see if he would accept a young puppy. The meeting did not go well as James had other ideas, and we were all concerned that a tiny puppy was not the answer for their situation.
While they were here they  met all the dogs  and Ken was quite taken with an older puppy a black and Tan girl  we had here and he rang   a few days later to see if perhaps they could purchase her.
Her name was Liza and no she was not available, as she was being shown and was needed for her bloodlines. On thinking about the situation I contacted them and offered her Liza's mother Inga. So they came down to try the introductions again with James. Well James was certainly still not keen to share his owners and  snarled and growled at Inga, who just turned her head and ignored him!
So off they went for a trial to see if it would work out. Over the years now we have come to know Carol and Ken well, and have become friends.
Carol writes to me regularly of the progress of our dogs and the wonderful life they have with them.
I  will  be quoting some of these emails, as we enjoy reading them so much we would like to share them with you.