Finally I am back to updating this blog, what a busy year it has been once again!
Our  very dear sweet  natured dog Rico gained his grand Championship in early October, making three generations of Sonree to gain this title. Rico was retired with 800 points towards his grand Title in 2009 after being awarded Reserve Dog at the Sydney Royal.
We had new boys to campaign, Harry his nephew who was awarded Best in Show at 8 months of age  plus many other wins,  and then Marcus, Harry's son who was also made up to  Australian Champion.
In 2012 as I had no other males to show  at the time, Rico was still looking pretty good  at age 6. I thought that I would take him along  to a few shows for company for the young females puppies I was then showing, to settle them.

Rico was like a new dog  and certainly had a new zest for showing, he just strutted his stuff and although many times younger dogs were awarded first place, he would invariably be awarded second place. There were still many times  though that he was placed first and Best of Breed. It took 18 months for him to gain the exrta 200 points he still needed for his 1000 points to be awarded his Grand Championshiptitle. 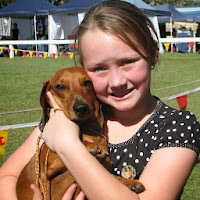 Rico has always been a favourite of the children, to take into the Junior Showmanship events held at the shows. The Junior handling events are a great way for the youngsters to come up through the ranks. This was to be the little girl's first effort in the competition, her grandmother didn't have a suitable manageable dog for her to enter with.  So she asked if she could take Rico. Rico would go off  with the children, although he would give me an inquiring look to ask if it was okay, I would just say  to him "Yes , off  you go, that's a good boy" and he would  happily  trot with off  with them for the competition. . The cute photo above with Elenni cuddling Rico was used  in an advertisement for the up coming Shows in the local newspaper recently.